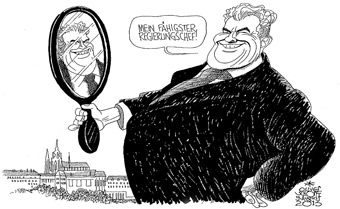 My most competent head of government!

The political crisis that began two months ago with the resignation of prime minister Petr Nečas refuses to go away. President Miloš Zeman announced that he would continue to keep "his" prime minister, Jiří Rusnok, in power despite the PM losing a confidence vote in parliament on August 7.

Meanwhile, parliament has also called an extraordinary session for August 16 where it is expected to dissolve itself, which would trigger the holding of early elections.

You can unsubscribe at anytime *
Categories
Europe abroadPolitics and democracyCzech Republic