In the debate on the role of foreigners and Muslims in Germany, Angela Merkel has called into question the model of integration which has held sway for several decades — a new position, which the German press believes is indicative of a shift to the right in Berlin.

Has multiculturalism a future? Football supporters at the Germany vs Turkey match for the Euro 2012 qualifiers, October 2010, Berlin

"Multiculturalism has failed." With three fatal words in her speech addressed to young members of her Christian Democratic Union party on 15 October, Angela Merkel has reignited the debate on Islam which has divided Germany in recent months. ""We feel tied to Christian values. Those who don't accept them don't have a place here," said the chancellor. 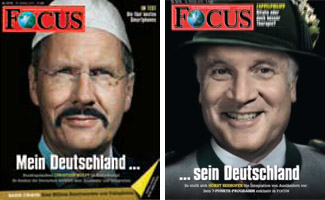 To illustrate the "clash of civilisations" in German politics, the magazine Focus has published a special dual-front page edition. The first front page features "My Germany," by President Christian Wulff, who recently declared that Islam “belongs” in the country. The second turns the spotlight on "his Germany" — the Germany of Horst Seehofer, premier of Bavaria and a key member of Merkel's ruling coalition, who insists "it is not our vocation to be a social worker for the world's immigrants," and presents a seven-point plan for immigration in the weekly’s pages. Somewhere in between these two positions, Angela Merkel, is struggling to assert her authority in the face of rumours that she may be replaced by Defence Minister Karl Theodor zu Guttenberg in the run-up to difficult regional elections.

Labelling the debate “out of date,” Tageszeitung argues that the notion of "multikulti" is no longer relevant. Even the Greens "stopped using the term about ten years ago, because it says nothing about contemporary life in Germany," remarks the alternative daily, dismissing demands for "more integration" (Merkel) and "more Leitkultur" (Seehofer) as empty posturing. Germany needs to bring in some 400,000 skilled workers, and "the government cannot expect to attract highly qualified migrants and, at the same time, promote a fear of foreigners."

History is repeating itself

In contrast, Die Welt argues that Merkel and Seehofer have a point. For the conservative daily, the issue is not about "immigrants who want to live, work and put down roots in our country, but many people are hostile to immigrants who import their laws with them.” Horst Seehofer and Angela Merkel are right to insist that immigrants should willingly and enthusiastically adopt the traditions of their host country. And Die Welt points out that in practice this means “learning to speak German in a reasonable time, and swearing on the Grundgesetz [the basic law of the German Federal Republic]."

A TAZ opinion piece argues that history is repeating itself, and draws a number of parallels between the current resurgence of right-wing politics — 37% of Germans believe there should be no place for Islam in the country and more than 50% "want to limit Muslim religious freedom” — and troubled moments in history. In particular, it likens the current debate to the dispute over Jewish immigrants, which took place against a backdrop of economic crisis shortly after the unification of Germany in 1879. At the time, the nationalist politician and writer Heinrich von Treitschke called for the full assimilation of religious minorities. "More than 130 years later, the current debate on Islam has been marked by similar demands,” notes Tageszeitung. “Any illusions we may have had about cheerful patriotism in a happy and increasingly civilised country have effectively been dispelled. The atmosphere in October 2010 resembles the dark days of the 1980s and 1990s, when Turkish and other foreigners’ homes were burning in Germany."

"We can count on the Germans to remain level-headed"

Die Zeit notes that the upsurge in populism in the ruling coalition has been prompted by fears of growing radicalism in the electorate. "At a time when major political parties appear to be increasingly devoid of legitimacy , Germany has also fallen victim to the temptation of populism," complains the weekly. Horst Seehofer has put himself on a par with the Netherlands’ Geert Wilders, while Angela Merkel, and the rest of the political establishment have been rattled by the success of Thilo Sarrazin xenophobic and populist theories. Thus "the attempt to surf the wave [launched by Sarrazin], is reflection of the fear that it may sweep them off their feet."

For Die Zeit, the debate has highlighted the extent to which immigration policy has become a headline issue, like disarmament and relations with Eastern Europe in the 1970s. "We can count on the Germans to remain level-headed," argues the weekly. "Surveys have shown that people are increasingly sceptical about Islam. But can a country that has accepted the construction of 2,600 mosques and prayer centres without major controversy really be described as Islamophobic?"

The Hamburg newspaper believes the Muslim community should confirm the fact that Germany is generally a tolerant society in a context where "there is no guarantee that this country will continue to sustain its current level of openness. At the same time, politicians should tell the truth and avoid pandering to people’s fears: No, we are not about to be overwhelmed by hordes of Muslims." Die Zeit reminds its readers that the number of migrants leaving the country now exceeds the number of new arrivals, and on this basis it argues that the focus of the debate is misplaced. "(D)iscussions should not be about the level of tolerance for Islam in Germany, but about the extent to which Germans are willing to accept a lack of generosity on the part of the state."

Can the debate now begin?

“Merkel: the multicultural approach to society ‘is a complete failure'” headlines Dutch daily De Volkskrant, in a country where the issue of the immigration has given the far right access to the corridors of power. “The debate has avoided touching on ethnic difference, which remains a sensitive issue in view of Germany’s Nazi past,” notes Trouw. “However, immigration can be discussed without getting bogged down in arguments about Nazism. Unfortunately, this is not the case in Vienna where such debates are inevitably fouled by politicians who aim to justify Austria’s Nazi past.”

The daily argues that Germany can make “major a contribution to the debate about immigration in Europe.” First and foremost, because Germans have the concept of “streitbare Demokratie [militant democracy], which grants the government power to withdraw the basic rights of those who would use their rights to undermine those of others. At the same time, Germany is also the country to have raised the issue of ‘Leitkultur’ [guiding culture], and the question of the dominance of Western mores. Unfortunately, the debate is unlikely to deal with two questions that are at the heart of the matter: is it possible that the influence of immigration will result in the birth of a new society with completely different values? And is our society defined by a fixed set of values that must be preserved?”