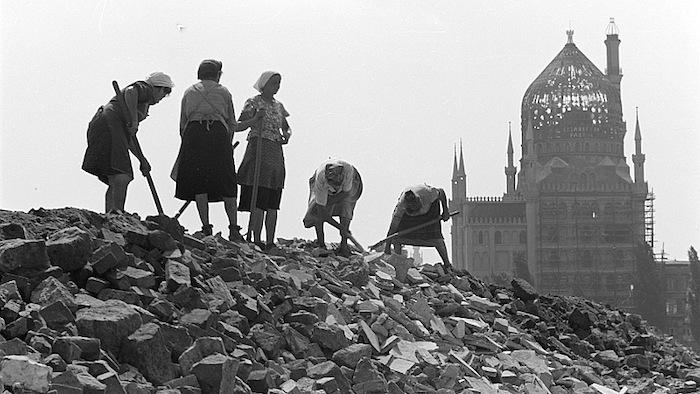 No celebration for German “Rubble women”

In the aftermath of the war, tens of thousands of women helped clear and reconstruct Germany's bombed cities and were sexual prey for the liberators. But their work and suffering was never given recognition, says a Swedish writer.

“Beware. The German is brutal when he wins, but whines and feels sorry for himself when he loses. They have a hysterical vein. You will notice that they throw themselves into uncontrollable passion when the smallest thing goes against them.”

“The German believes that we are Aryan cousins, because we look alike on the outside, but the more you delve into the German soul, the more differences you will find.”

The quotes come from the British Foreign Office’s instructions given to every British soldier arriving Germany at the end of the war.

Like any traveller´s guide, it describes the political system – the Gestapo, the SS, etc – as well as the German mindset and the length of the rivers. And it ends with an obligatory phrasebook: I beg your pardon. Hands up! Ein Wienerschnitzel bitte.

The little red book, which was translated into German last Christmas, is still on Der Spiegel’s bestsellers list. The book is a distorting mirror that warps its subject into the most extreme stereotypes. But it is also a record of what the Allies actually were to encounter in defeated Germany. “The Germans will be emaciated and malnourished, tired and pleading, but they have themselves to blame. Be a gentleman – but never be sentimental.”

This weekend, the end of the war will be celebrated. But the fight over what to call the day goes on. Liberation Day? Day of Capitulation? Of Catharsis? Of the Victors?

In Sweden we say that peace was celebrated. But to the rest of Europe peace means more than throwing confetti at each other on the Kungsgatan [the main street in Stockholm]. Morally and materially, the world had been shattered. There was no one without blood on their hands. Europe had hit zero hour.

Few wish to remember how they compromised on their values. Most would rather toss their memories onto the scrapheap of oblivion, or store them in some inaccessible archive. The whole mad idea to send people to concentration camps would have been impossible to carry out without solid, even zealous, collaboration from a Europe that had lost its senses.

There is some difference between indifference, cowardice and fear. Civil courage is not inherent, but rather a proficiency that must be practised. The extraordinarily well-made French television series Un village français gives us some idea of this.

While some view neutrality and non-alliance as smart survival strategies, others see them as a perpetual shame. A painful reminder that asks: What did I do? Nothing!
History is always written by the winners.

If I want to be a winner, I must listen to them. But if I want to be an open and whole person, I must also understand the thoughts of the defeated. And I must think about the utterly incomprehensible fact that memorials are erected and history is written, without a word about the women.

I’m thinking about the Trümmerfrauen.

Those who, after the war, stood in the rubble and the ashes and cleared the ruins. Those who with their bare hands sorted the stones into different buckets. Who lifted the rubble, cleaned, dragged and tore.

In Berlin alone there were 75 million cubic meters of rubble. Made into a wall five metres high and 30 metres wide, the rubble would stretch all the way from Cologne to Berlin (750 kilometers).

Forget the digging machines, these only came at the beginning of the 1950s. Forget the men, they were either dead or were prisoners-of-war – one-legged, alcoholic and traumatized.
So who are the Trümmerfrauen – losers, victims or heroines?

One thing has long been clear. They were prey. When the liberators arrived, everything belonged to the occupation powers. The whole of Berlin was turned into a open brothel. Miriam Gebhardt’s recently published book Als die Soldaten kamen "When the soldiers came” rid us of any last delusion that only the Russian soldiers raped. German pride was to be hammered out of all German women by the foremost weapon of the patriarchy: sexual violence.

How will the Trümmerfrauen celebrate "peace”?

In Grunewald in west Berlin, there is a retirement home. On Tuesdays some of them meet there to do gymnastics. I may join in if I like, and have sausage and sauerkraut afterwards.
I want to. But I’m afraid. I’m afraid of the pain and the smells.

I know that they washed their vaginas with Lysol, a strong cleaning product, to make the occupation powers think they had venereal diseases.

I know that the medical assistants struggle. How is one supposed to wash a person who no one is allowed to touch? Whose body carries memories that no one has spoken about?

How to speak about the pain that the victors blame you for?

I ask a colleague from the Irish Times to come with me. Our neutral heritage – real or not – works as some sort of entry ticket. And German ladies usually appreciate well behaved young men. And Silvia Sommerlath [the maiden name of Queen Silvia of Sweden].

It’s April and everything is light green when we park our bikes on Herthastrasse.

Nine ladies in their 90s are sitting on their chairs, waiting for us. Some can see, some can hear, most of them can only walk with help. Frau Adly leads the group, it costs 2 euros to take part, and the money is put into a piggy bank. Once a year they empty it and treat themselves to a Christmas lunch and a small Christmas gift. She puts on the record with music by Johann Strauss and starts her imaginative instructions of how we are to move our bodies.

We lift our arms up, and they fall down – like the plane in the Alps, or like the currency, she says.

I’m overcome with tenderness, glance at the reporter for The Irish Times, he is sitting in his chair, joining in with the smacking, with eyes clearly watering.

Germany spends millions on statues and memorials. But rebuilding Berlin in 1945 does not merit a supplementary pension. These ladies are not invited to any ceremonies. When the rent is paid they have a fiver left.

One either eats or takes the bus, says Frau Adly.

Do you ever talk about "peace”, I ask. And get no answer.

We were defeated. We sat on the ground sorting the stones, says Frau Görlitz. One does as best one can. One tries to forget.

Those who converted from Nazism to Stalinism had more to eat. If the swastika was cut out, the flag turned red.

I will never condemn a young person, says Frau Kopitz. When one is young, one is passionate and thoughtless. After all, not even wise people saw what was coming.

As they try to forget, the world tries hard to remember.

At a time when Margot Wallström’s [Sweden’s social democratic foreign minister] feminist foreign politics are sometimes ridiculed and sometimes praised, it is worth thinking about the Trümmerfrauen.

When Chancellor Angela Merkel lays down her wreath and Putin drives his missiles across the Red Square on ”Peace Day”, I will do that.

I will never be able to hear a Strauss operetta again – without smiling.