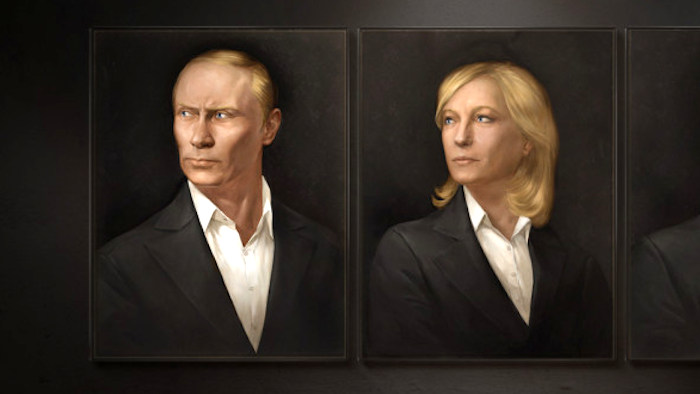 The far-right candidate in the second round of the French presidential election on 7 May has a long track record of more or less secret trips to Moscow to meet both President Vladimir Putin and some of his close allies. Although she denies having received money from them, it leaves open the question of how much influence the Kremlin has on the National Front.

There’s a curious painting on the wall in Marine Le Pen's headquarters in the chic 8th arrondissement in Paris. It shows the far-right candidate in the French presidential election with the Russian and US presidents on either side. On a black background, in the style of the Soviet era, Le Pen, Vladimir Putin, and Donald Trump gaze out to a common horizon. She got it as a gift from Russian nationalist activist Maria Katasonova, whom she met in Paris a few days after she met Putin in Moscow on 24 March.

Her meeting with Putin was a political masterstroke. It showcased her idea of putting France at the centre of a nationalist Washington-Paris-Moscow axis if she was elected. Putin used it to send a political message to Europe. The high-profile event at his Kremlin palace, held just one month before the first round of the French election on 23 April, was designed to show that he still backed her despite her party, the National Front’s (FN), failure to win anything in French regional elections in 2015.

Le Pen has also praised Trump, even if she had nothing nice to say about his missile strike in Syria on 6 April against Russia’s ally, Syrian president Bashar al-Assad. Her admiration of Putin goes back further and has been more constant, however. The surprise meeting on 24 March was said by Le Pen and by several media to be first of its kind. But in fact she already met him in 2014 and in 2015. Three high-level sources in the FN told the authors of this article that the meetings took place amid the utmost secrecy.

The FN founder, and her father, Jean-Marie Le Pen, let the cat out of the bag in a recent BBC documentary. "I've never met him [Putin], but he's met Marine," he said in an interview conducted prior to 24 March. Her then-foreign affairs adviser and an FN MEP, Aymeric Chauprade, also told the French BFMTV channel in December 2014 that she […]

Thousand of automated social network accounts are being used to spread fake news attacking centrist candidate Emmanuel Macron ahead of the French presidential run-off on 7 May. Fake news often originating on Russian news outlets such as RT and Sputnik has for weeks targeted Macron, who is opposed to Russia-backed far-right candidate Marine Le Pen.

Ben Nimmo, a researcher who investigated all posts mentioning or retweeting RT France and Sputnik France, found that some of the accounts spreading the fake news were openly pro-Russian, but most were "strongly French nationalist and opposed to Emmanuel Macron". Nimmo, a senior fellow on information defence at the Washington-based Digital Forensic Research Lab, told EUobserver these accounts were also not united in their French political views. Some supported Le Pen, others supported Francois Asselineau, another anti-EU candidate who failed to make it to the run-off.

However, his research seems to confirm rumours on the use of Twitter bots during the election. “A number of the most active amplifiers appeared to be heavily automated, tweeting hundreds of times a day, with 98 percent or more of their posts retweets,” he said. Bots are accounts run by algorithms, with little or no intervention from a human user. Nimmo and his colleagues concluded that the account was a bot if it provided no personal information about the user, tweeted more than 100 times a day and posted more than 85 percent retweets. […] Read the complete article on EUobserver.