Report Hungary
Detail from "The Charge of the Cavalry" by Jánois Körényi.

Orbán makes an exhibition of himself

Asserting national values is central to the political project of the Hungarian PM. Since the start of the year, fifteen paintings, specially commissioned for an exhibition in the Castle of Buda, have been putting this ambition on show.

The Hungarian National Gallery in the splendid building of Royal Palace of Buda is putting on two highly didactic exhibitions. The first, called “Heroes, Kings and Saints” brings together the most famous works of Hungary’s Romantic artists of the 19th century.

The floor below hosts the second exhibitionwhich, despite a leap of more than a hundred years, is an organic continuation of the first. Fifteen paintings, commissioned by the personally authorised representative of Hungarian PM Viktor Orbán, serve to illustrate the new Hungarian constitution, presenting a national, romantic style of painting at the beginning of the 21st century.

What both have in common is that they show how Viktor Orbán’s government imagines true art, and how it is attempting to enforce this new official artistic canon.

Although there are works of quality among those illustrating the Constitution, talent was clearly not a decisive factor in their selection. Much more significant was that the exhibition commissar, Imre Kerényi, and the artists commissioned shared the same ideology. Kerényi (who distinguished himself before 1989 in orchestrating grand communist meetings) boasted that he had guided the artists during the creative process and had also inspired various changes and additions. 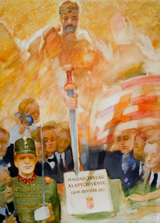 The paintings depict the key moments of Hungarian history. The cornerstone of the exhibition is a painting of Saint Stephen, founder of the Hungarian state, pointing his sword at the new constitution. The sword symbolises determination, because “adopting a new Constitution is not for fence-sitters and the faint-hearted," explains the painter.

Rumour has it that if Orbán does not figure amongst these heroes of national history it is only because his wife was opposed to the idea. In the middle of another painting stands Albert Apponyi, symbol of the martyred nation and head of the Hungarian delegation at the peace talks that ended with the Treaty of Trianon [June 4, 1920, in Versailles].

The foreign politicians who imposed the carve up of Hungary are represented as symbolic executioners. Masonic symbols complete the picture, making it clear even to the dullest audience who lurks behind it all. 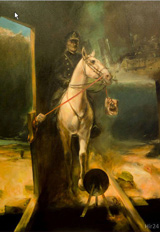 Regent Horthy [who ruled the country from 1920 to 1944], symbol of the interwar period, sits on a horse that is unable to go its own way, because the bridle rein is clenched by the mysterious hands of a monster.

It’s a clear reference to the trials of the Orbán government, which is also prevented from doing good only by dark forces abroad and traitors at home.

The greatest outrage and amusement, however, is provoked by the portrayal of the unrest of 2006 [a demonstration against the socialist government of Ferenc Gyurcsány, organized to mark the 50th anniversary of 1956 uprising]. 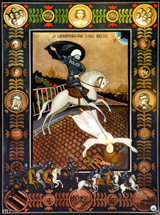 Using the theme of St. George slaying the dragon, the author paints a policeman dressed in black astride a horse spearing a recumbent lady in white. According to the artist, the princess symbolises the Hungarian nation trampled on by the "demonic" power of a foreign nation.

This painting perfectly illustrates the new compulsory artistic canon, which is there only as a tool to promote a single and correct official interpretation of history and current political events. More specifically, it is a rewrite of history and reality underpinned by a politically motivated mythology.

The exhibitions at the Castle of Buda are only the most visible examples of this phenomenon. They seek, by all means necessary, to impose a new “true” Hungarian culture and mythology. The new constitution, which came into force at the start of the year has elevated the so-called Hungarian Academy of Arts to the same level as the venerable Hungarian Academy of Sciences.

Despite the magnificent title, it was previously a private association of artists of a nationalist orientation and loyal to Orbán. A television programme, for example, is devoted to presenting all the things Hungary gave to the world and that Hungarians invented.

In another programme, Magyarország, szeretlek! [“Hungary, I love you”], teams made up of sport and media celebrities compete in giving positive impressions of their native land.

And lest the second pillar in the statist ideology enshrined in the constitution be forgotten, a family game show about the bible completes this propagation of patriotism.

This is all wrapped in kitsch copied from commercial TV, which makes it all the more ridiculous, given the stubborn length the show goes to in order to convey traditional values.

This official culture promoted by the state is becoming increasingly laughable. Its manic self-promotion sparks comparisons with an insecure paranoic who needs constant reassurances of his own importance and brooks no criticism.

With the help of state cultural institutions and chummy expatriate associations, this predominantly sheeplike and regimented culture is even being spread abroad. Last year, several nationalist versifiers came to the Pohoda festival in Slovakia, as did a former Orbán government spokesman and editor of a state-founded, heavily subsidised weekly, for a discussion on the status of the Hungarian media. To uninformed foreign audiences these visitors are put forward as representatives of a Hungarian culture of quality. Fortunately, they are not – at least, not for now.

Teaching under the influence

"Teaching Orban's basic law will be obligatory," says Hungrian daily Népszava. The measure is part of the new National Teaching Curriculum (NAT) presented February 6. It is aimed at "providing guidance in all parts of life". "The spirit of the new Constitution and of the Declaration of National Cooperation, on which the new regime is founded, must be present," explains Rózsa Hoffmann, Secretary of Education.

For some experts and trade unionists quoted by Népszava, "the new NAT drastically reduces the freedom of professors in a deeply conservative frame-work, where the goals of public education become teaching morals, family life and patriotism".