Report Central Europe's drifting towards populism
'We want a second Budapest, not Kiev' – A banner held by Polish nationalists during a far-right demonstration in Budapest, on 15 March 2015. 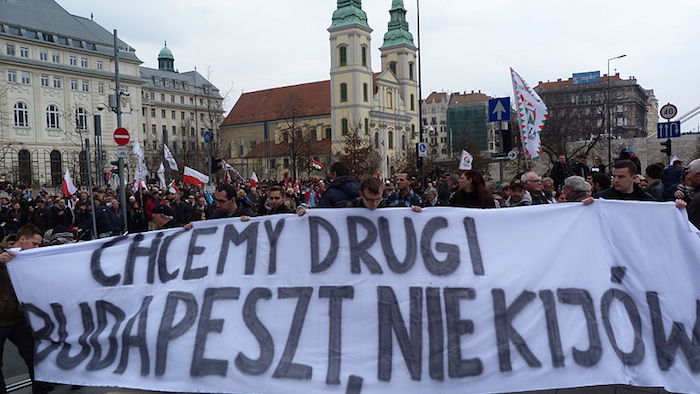 Poland, Czech Republic, Hungary, Germany and Austria, previously very tolerant, are giving more and more of their votes to nationalist parties. What could explain this change?

Andor Derzsi Elekes  | 'We want a second Budapest, not Kiev' – A banner held by Polish nationalists during a far-right demonstration in Budapest, on 15 March 2015.

Mitteleuropa is a word which doesn’t have an equivalent in French. It groups the countries of Central Europe in a restricted sense: the members of the Visegrád Group (Poland, Czech Republic, Slovakia, Hungary) and the Germanophone countries. It is an idea that goes back to the 19th century, according to which the populations of Central Europe are intrinsically linked to the German-speaking populations. Is has been seen as a justification for Prussia’s expansion to the east. Unfortunately, recent events may prove correct what had seemed far-fetched: the rise of the authoritarian right perhaps foreshadows a common destiny. As someone who cares very much for the region, it is time that I raise the alarm.

Xenophobia from Budapest to Berlin, by way of Warsaw

Budapest opened the way for the headlong rush towards xenophobia. Succeeding Ferenc Gyurcsány, who had been a cynical, though progressive politician, Viktor Orbán came to power in 2010. He quickly began dismantling Hungarian democracy. The authoritarian prime minister managed to profit politically from the 2015 migrant crisis, reinforcing his position by denouncing the European Union’s refugee quotas for member states, on the pretext that it endangered citizens’ safety.

Poland went in the same direction. After eight years of liberalism and the departure of Donald Tusk to Brussels, the strongly conservative Law and Justice party (PiS) came to power two years ago. Again, the new government talked up a wave of “islamists” coming from abroad. “Muslim refugees have brought cholera to the Greek islands and dysentery to Vienna”, asserts loud and proud the leader of PiS, Jarosław Kaczyński, all the while attacking the bureaucrats in Brussels.

A new outbreak followed in recent weeks. On September 24th, the two largest mainstream parties in Germany received their worst results since 1949. The far right received more votes than ever since the second world war, when “national socialism” wrought the damage we know only too well. It was remarkable entrance to the Bundestag, with no less than an eighth of the overall vote and 94 seats.

Hardly three weeks passed and their neighbours in Austria were enjoying the rise to power of the FPÖ with 26% of votes. Vienna had expected even worse: polls put the far-right in the lead back in December, with 35% of voter intention, ahead of the nearest contender by 10 points.

Saturday, we have discovered the new composition of the Czech parliament. Populist, pro-Russian Andrej Babiš and his ANO movement scored nearly 30 percent of votes and 78 seats (see below). Conservative and euroscepitc ODS is second and far-right fourth, after the Pirate party.

A very dark picture emerges from this Mitteleuropa. As if the population was turned in on itself, disinclined to cooperate with others. And yet, as anyone familiar the region will tell you, this isn’t the case. I should know: I lived there half my life. After having spent my early childhood in Czechoslovakia, I went to primary school in Poland, college in Austria, Erasmus in Germany, and then spent another seven years in Warsaw after my studies were finished. I was always welcomed with open arms - me, the French guy - with nobody even asking where I’m from. I’ve always met very warm and welcoming people there.

Could the very nature of these people change so drastically in such a short space of time? I don’t believe so. What can change, however, are those who pull the strings, who manipulate the crowds. Out of political expediency, they’ve pointed the attention of the electorate to problems which are often secondary, without offering any realistic solutions, while brandishing the scarecrow of some imaginary enemy.

The communist past and identity

There is a disturbing connection between this rise in the far right and the recent past: for the most part, these countries emerged from communism 25 years ago. In Germany, it was above all the Länder of the ex-DDR who voted for the AfD. A part of the country where the electorate tended to vote far left even after the fall of “real socialism”. But what is the connection between nationalism and communism? At first glance, nothing at all.

Both, however, share a common tactic of pointing to an enemy, presenting the eradication of that enemy as the solution, and arguing that only authoritarian power can achieve that goal. A half-century of communism has had its effect: civil society is weaker in the region and the citizens are increasingly tempted by populist simplifications.

Another legacy of that period: citizens feel that they have not yet experienced enough of the benefits of a market economy to want to share it with others (refugees, for example). In Austria, on the other hand, it is felt that Austria and the EU have already given enough help to nearby countries, in welcoming them to the local labour market, opening the borders, and by means of structural funds. The German-speaking country, with 8 million inhabitants, is too small to receive all the misery of the world.

The question of national identity is equally sensitive in Mitteleuropa. The slavic nations have always had a visceral attachment to their motherland. Nevertheless, their identities are often put to difficult challenges, squeezed in the vice between Berlin and Moscow - some would argue that it is now Brussels which exerts a comparable force. This is why the European Union’s quota system is so unpopular. In the Germanophone countries, the problem of identity is entirely different.

After the atrocities of the second world war, Germans and Austrians were ashamed of their nationality. It was only gradually that they could build on values such as democracy and liberty. It was a fragile reconstruction that will be tested by migrants coming from reputedly intolerant nations. The madness of the gas chambers has totally immunized Germany and Austria from anti-semitism.

This isn’t a trial run for Mitteleuropa. It is already home to many foreigners. A large Turkish minority lives in the the German-speaking countries; many Hungarians and Roma live in Slovakia. These aren’t always models of integration, there are numerous ethnic tensions. Poland, on the other hand, has been remarkably homogenous up until very recently. But the crisis in Ukraine and the solid flow of immigrants from that country served as an argument for the prime minister, Beata Szydło, to end all immigration from the South.

Mitteleuropa, wake up before it’s too late!

Many factors, then, can contribute to an explanation of the rise of xenophobia. Nevertheless, to explain is not to justify: the aggressions against migrants, the rhetoric of scapegoats and the closure of borders in an open Europe can not be tolerated. What’s more, the preservation of the identity of Mitteleuropa is certainly not the real reason for this growing attitude. It is a pretext to justify the authoritarianism and strangling of liberties that we already see in Hungary. With the far right about to take power, Austrians may pay a similar price.

Wake up, then, Mitteleuropa. You’ve shown in the past that you’re capable of worse, but also better. It was Poland that adopted the first constitution in Europe at the end of the 18th century. It is Germany that showed the way to reconciliation by launching the European project. It was the Czech and Slovak nations that proved that countries could divorce quickly and amicably, as opposed to what we see now with Brexit. Mitteleuropa, you have all the resources necessary to reject this disgraceful nationalist ideology. But you should act quickly, before the far right make their power irreversible.

Populist billionaire Andrej Babiš' ANO 2011 party has scored a massive victory in 20 and 21 October parliamentary election, securing 78 seats over the Parliament's 200 and 29.64 percent of votes. ANO 2011 is the most voted party in every region in the country. Babiš started talks on 22 October with the other parties for forming the new government, says MF DNES.