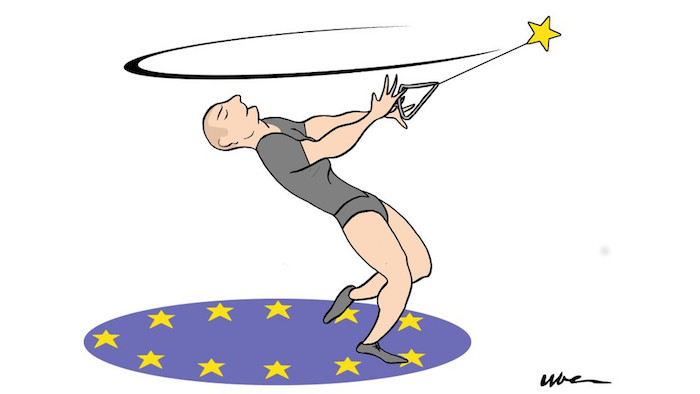 Relaunching the Union along with its citizens

The Civico Europa association calls for a new revival from European leaders as well as from all citizens, opinion influencers, trade unions, and business organisations around the continent, and encourages all Europeans to participate in the citizen consultations, for a more democratic and influent Europe. VoxEurop supports Civico Europe's initiative.

In this period of economic recovery and relative stability, we Europeans are forgetting that not so long ago we stood on the edge of an abyss, and that our reality is still crippled by geopolitical and financial uncertainties, with record-high debt levels in Asia and America capable of triggering another worldwide economic crisis.
And we also forget that Heads of State and government on their own, without a concrete citizen participation, cannot face up to the numerous and complex challenges lying ahead.
On the 9th of May 2016, we launched an appeal for a new European renaissance. Our main concern was to avoid the implosion of the European project in an unprecedented political momentum characterised by the rise of populistic and nationalistic sentiments. Our conviction being that only a sweeping movement gathering citizens and opinion leaders from across the political spectrum, could generate sufficient political pressure to guarantee the unity of the 27 in the event the United Kingdom’s European Union membership referendum would yield a negative outcome. European leaders had indeed agreed to David Cameron’s demands not to prepare a plan B since, he believed, preparing for an eventual exit of the United Kingdom could have accentuated the risk of a negative vote.
Our appeal was then formidably received. Tens of thousands of citizens reacted across the continent. Heads of State and Government summoned us and, most importantly, followed our double recommendation: remain united in negotiation and initiate work on a draft roadmap for the future of the Union. The presidents of the European Commission and Council asked us to lead a reflection on the contents of this roadmap and, generally, on the best way to articulate national and European sovereignty. The outcomes of this reflection were outlined in the report on « The European Way for a Better Future » which was presented to them in March 2017. The essence of our proposals has since been the object of substantial political adoption, by the President of the European Commission in his latest State of the Union address, as well as by French President Emmanuel Macron, in his landmark Sorbonne and Strasbourg speeches. The European Parliament also took it on board.
A number of our specific recommendations are now becoming a reality, such as the citizen consultations, the priority now given to AI by the European Commission, the improvement of information quality, the modernisation of the European social model, and the Erasmus in Schools project. This progress still needs to be supported by a budget enabling the democratisation of Erasmus, the maintenance of an ambitious cultural program, and a lasting expansion of R&D efforts. We are therefore happy for our successes, but remain worried nonetheless.
The wish for a stronger Europe expressed by our fellow citizens in the aftermath of the British referendum risks deflating if words are not followed by additional concrete actions. The latest electoral results showcase a continuous rise of populist movements. Making matters worse, respect for the rule of law and the fundamental values, media pluralism and freedom of speech, appear to never have been this endangered within the Union. Yet the latter seems to be passively entering a new phase of lethargy, with Brexit fully enacted in only a few months.
Therefore, we call for a new revival from our leaders as well as from all citizens, opinion influencers, trade unions, and business organisations around the continent. Without a commitment of the June European Council on a clear plan and calendar for the revival of the Union, made of concrete actions having a positive impact on citizens’ daily lives, the next European elections will be marked by an unprecedented rise of populist forces. Accordingly, we encourage all Europeans to participate in the citizen consultations, in the hope they achieve to include even the most vulnerable and lead to a genuine consideration of all the different opinions expressed.
That being said, it is our deep conviction that we should aim to be more innovative and ambitious in this unprecedented period of transformation. And It is with this ambition in mind that we want to invent a new step in European democracy.
Indeed, we propose to create a perpetual right to participation in the political life of the Union, and invite all to join us in building civico.eu, a permanent civic platform, transnational and multilingual, allowing citizens not only to be consulted but also to drive a direct civic dialogue making concrete proposals emerge to continuously feed European institutions.
Today’s digital technologies, the progress made in automated translation, and the developments in relation to AI, allow for democracy to be envisaged differently. This is in no way about putting representative democracy to rest but about complementing it, through a democratic tool enabling continuous deliberative participation. Today more than ever, we are convinced that our fellow citizens must be empowered to form a genuine transnational civic force.
Seventy years to the day after The Hague Congress, true founding act of the European Union, we call for a new congress of the European consciousness before the end of the year, assembling citizens, opinion influencers, and leaders from across the European spectrum, to start writing together a new page of our common history. It is by equally entrusting swift and concrete advancements, a democratic renewal securing our fundamental values, and a gathering of good wills, that we will rekindle the trust between European citizens and European institutions in a spirit of renewed solidarity.
This is the fundamental condition to enable the transformation of the Union into a great democratic, cultural, social, environmental, and industrial power, capable of decisively weighing on the evolution of our planet, the safeguard of its citizens’ interests, and the advent of a better world.