Report A call to European citizens and leaders 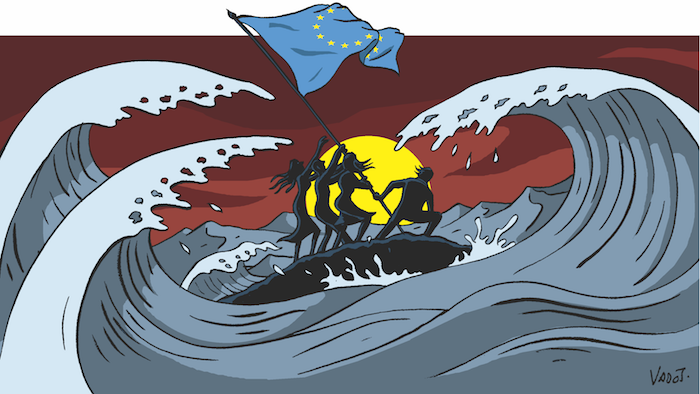 Report A call to European citizens and leaders

Our Europe is in danger.

Our Europe, the most impressive political construction of modern times, cannot stand by as national governments jeopardise its democratic, economic, social, cultural and environmental model. They have shown inertia and distrust when faced first with economic crisis, then with refugees and most recently with terrorism. Each successive threat has been worsened by a lack of cooperation and coordination between European governments.

The time has surely come for Europe’s citizens to make our voices heard, to express our desire for ever stronger unity and solidarity, for deeper political union.

Europe is not the cause of our problems, but the solution. For too long, our fate has sat in the hands of national leaders and partially discredited European institutions.

Once a symbol of peace, openness and solidarity, Europe has become synonymous with insularity, exclusion and self-absorption. And where Europeans are increasingly struggling to see their values reflected.

Let us not consign ourselves to helplessness, to a lack of confidence, to doubts and fears, to images of refugees dying at our borders because of a lack of solidarity from member states and because our leaders do not have the courage to the right thing.

If is now urgent for us to move beyond the strictly national arena and to construct a truly European political foundation to take on the challenges of globalisation, modernity and a revived democracy through the direct election of EU leaders.

Our sense of belonging to a European people, to a community of values, is too often thwarted by our inability to translate this desire into politics. That is why we are calling to turn May 9 into a true citizens’ day for Europe, to send a message to our leaders, to state that Europe is our nation and that it can have no future without political union and the construction of a firm shell around a united European state.

To begin, this 9 May, the day Europe celebrates peace and unity, let us show our attachment to a community of solidarity, unity, democracy and openness. “If we cannot dream of a better Europe, we will never construct a better Europe” Václav Havel once said. Let us show our desire for Europe to step forward.

Let us fly Europe’s flag – our flag – on our social network profiles, our web pages, our houses, our cars and bikes, everywhere!