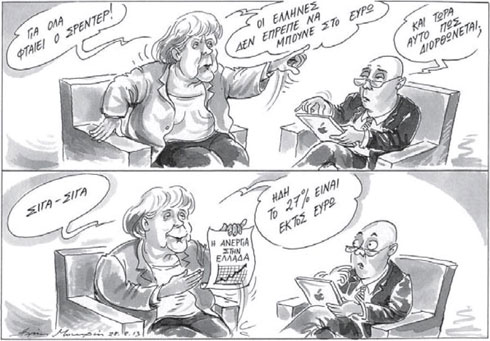 It’s all Schröder’s fault! Greeks should never have joined the euro.
So how do we fix that now?
We’re getting there. Already 27 per cent are out of the euro.
**On the sheet: ‘Unemployment rate in Greece’

In an election speech on August 27 in Rendsburg, German Chancellor Angela Merkel accused her Social Democratic predecessor Gerhard Schröder of having made “fundamentally wrong” decisions by agreeing to Greece’s accession to the Eurozone in 2001.

Angela Merkel blamed this as the starting point of all the problems facing the single currency reports I Kathimerini.