Ideas Crackdown on democracy in Turkey 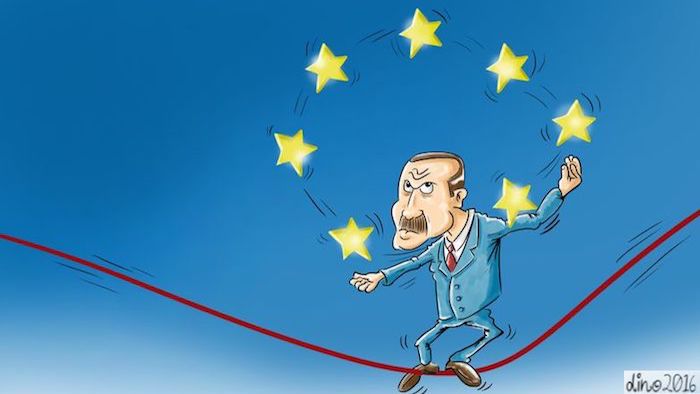 Ideas Crackdown on democracy in Turkey

Should Europe still stand by Erdoğan?

The government has fiercely cracked down on those accused of being close to the alleged mastermind behind July’s attempted coup, and thisis slowly turning Turkey into an authoritarian regime. Complecent European leaders, starting with Swedish Foreign Minister Carl Bildt, should stop supporting president Recep Tayyip Erdoğan, says a Turkish academic based in Sweden.

“Is Brussels asleep, or just ignorant?”, asked the former Prime Minister and Foreign Minister of Sweden Carl Bildt in an op-ed in Politico, lambasting European leaders’ “tepid response” to the failed July 15 coup in Turkey. “It took some time for the EU to condemn the events”, wrote Bildt; instead, “Europe’s leaders immediately began to question measures taken by the Turkish authorities to cleanse from power any elements thought to be associated with the Gülen movement”.

For him, there was “no question that Turkey has the right to, and indeed must, take measures to safeguard itself against forces trying to topple its constitutional order.” Of course, “there is a severe risk these measures will go too far”, but the Council of Europe and the European Court of Human Rights could assess this when things calm down. In any case, “it is hard to know at this stage if the government is casting the net too wide or not wide enough, but erring in either direction will only create new problems”.

This is also the main thrust of a report published by the European Council on Foreign Relations (ECFR) Carl Bildt co-chairs. Penned by the Senior Policy Fellow Aslı Aydıntaşbaş and dubbed “by far the best you can find on the Gülenist movement and its dangerous role in Turkey” by Bildt, the report takes the official narrative for granted and claims that the coup was indeed the Gülenist officers’ doing – turning a blind eye to the many inconsistencies, indeed contradictions, in the statements of the captured putschists and the factual loopholes in the narrative which have led many observers to argue that what transpired on this fateful night was much more complicated than the AKP government would have us believe.

To be fair, the report does mention the post-coup “crackdown” in its concluding pages, yet blames it on “over-zealous investigators”, worrying more about the threat this poses to Turkey’s “image at home and abroad” than its actual victims. [Note from the Editor: The report’s author also states that “at times, the post-coup period itself feels like a coup in and of itself.”]

How can we make sense of this sudden and, to the best of our knowledge, unsolicited Erdoğanophilia (Bildt’s above-mentioned article is entitled “Europe, Stand up for Erdoğan”, not for Turkey or for democracy)?

Is it simply a show of solidarity on the part of a fellow conservative politician whose career is (equally?) embroiled in controversy – a diplomat who, when he was the EU’s special envoy to the former Yugoslavia, “blocked airstrikes that could have prevented the massacre of 6,000 men in Srebrenica” according to declassified documentspublished by the Clinton Presidential Library; a foreign minister who was questioned by the Riksdag (Swedish parliament)’s Constitutional Committee for his membership of the board of Vostok Nafta, an investment company with holdings in the Russian company Gazprom (Bildt left the company two months after he became foreign minister); a foreign minister who was also a board member of Lundin Petroleum, an oil company which was accused in a 2010 report by the European Coalition on Oil in Sudan, in addition to several NGOs and human rights organizations, of being complicit in war crimes and crimes against humanity?

Or is he an old-school Eurocrat, perhaps a romantic maverick, who is seeking to defend the “political ideal and democratic values” of Europe which he claims were not reflected in EU’s response to the failed coup in Turkey? Does he really believe that a stronger engagement with Turkey could improve the prospects of democracy in Turkey?

If it were a genuine concern or passion for democracy, why has our maverick been watching Turkey’s rapid transformation into a fully-fledged dictatorship in the three and a half months that followed the botched coup silently? Does he think that the measures taken by the Turkish government have still not gone too far? Is the net still cast not wide enough to be worthy of one single critical tweet?

Worried by raid yesterday against @cumhuriyetgzt in Turkey. Hardly a terrorist center.

Or perhaps he is too busy trotting the globe to keep up with the dizzying pace of political change in Turkey. Well, then, let us do him a small favour and provide a quick roundup of the events of the last few days, for a fuller account of the post-coup crackdown would require no less than a novella:

As anyone following the news in Turkey would readily notice, this list is only the tip of a massive iceberg – yet apparently not large enough to be noticed by Carl Bildt and his colleagues at ECFR who prefer to stick to “the view from Ankara” as the title of an article by İbrahim Kalın, advisor to President Erdoğan and a close friend of Bildt, published on ECFR website, indicates.

Carl Bildt is chosen as a conversation partner here as he was the first political figure of some repute to come to Erdoğan’s rescue in the aftermath of the failed coup, and the first to use the trope of “evil Gülenists” (the very people the ECFR cooperated with back in 2011) versus “good, democracy-loving people”. Alas, Turkey was not a democracy either on July 14 or 16, and the fact that there has been a bloody coup attempt in between – the details of which still remain shrouded in mystery – does not alter this simple fact.

On the other hand, the argument that closer links between the EU and Turkey, perpetrated by Bildt and his colleagues is plain wrong since 1) the EU has already been engaging with Turkey for the last two years when it suits its interests, e.g. to bring the refugee flow to a halt, without any scruples about the increasingly authoritarian character of the regime; 2) the EU is no longer in a position to speak from a moral high ground given its own ongoing slide into the dark side; and 3) Erdoğan has proven time and again that he is not someone to yield to external pressure, which he normally uses to his own advantage to stoke the nationalist fire.

Too pessimistic? Indeed. Could there be a crack in the wall through which democracy can come to Turkey – to paraphrase the lyrics of Leonard Cohen’s famous song? Perhaps, but not in the near future.