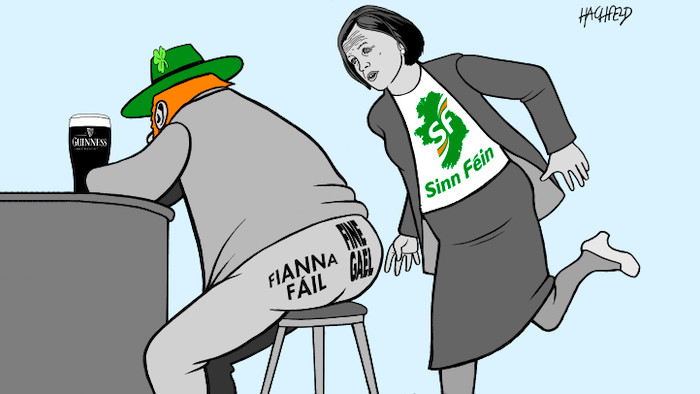 Report Ireland after the general election

Sinn Féin’s day is yet to come

Despite its election victory, left republican party Sinn Féin is unlikely to lead the next Irish government. The British government will be breathing a sigh of relief.

The outgoing liberal-conservative Fine Gael party won 20.9 percent, giving it 35 seats, while Fianna Fáil, the party in power during the country's boom and bust, won 22.2 per cent, giving it 38 seats.

As a result, Sinn Féin will not be in power. Not yet, anyway.

And with that, the British government is surely breathing a sigh of relief.

The historical record shows that British governments, despite noisy denials, have always talked to Irish republicans. Successive governments in Westminster maintained contact with the Provisional IRA, including during the darkest years of the conflict, such as 1972, when more people were killed than in any other year, and, crucially, during the tumult of the 1981 hunger strikes, the event that gave life to Sinn Féin as an electoral force.

Before the hunger strikes Sinn Féin had been a political tail wagged by the IRA dog. In 1938 it gave all authority – and, in its eyes, the right to govern Ireland – to the Army Council, the leadership of the IRA. This quixotic position was an article of faith for hardline republicans – and a joke to everyone else. After the hunger strikes, Sinn Féin slowly rose as a political force, predominantly in Northern Ireland but also in the Republic. From then on, Irish republicans followed a twin track strategy, summed up in a speech by then director of publicity for Sinn Féin Danny Morrison, now a novelist. “Who here really believes we can win the war through the ballot box?” Morrison asked at Sinn Féin’s 1981 Ard Fheis (annual conference). “But will anyone here object if, with a ballot paper in this hand and an Armalite in the other, we take power in Ireland.”

As time passed, and with hardliners splitting off twice in 1986 and 1997, the ballot box came to take precedence over the armalite and, consequently, Sinn Féin took precedence over the IRA – though questions remain about the IRA, which, while disarmed, is widely believed to remain in existence (official reports indicate that authorities believe the IRA is being left to wither away, rather than being either shut down or renewed).

Later, in the 1990s, successive British governments openly talked to Sinn Féin in an effort to bring about a ceasefire, an end to the conflict and, finally, the power-sharing devolved regional assembly in Belfast.

What Britain has never had to do, however, is deal with Irish republicans as equals – and there is little sign that the British establishment is up to the job.

Since Britain voted for Brexit, British journalists and politicians alike have raged at Ireland, seeing the county as an errant province that is spoiling the party. The country’s outgoing taoiseach (prime minister) Leo Varadkar was portrayed, variously, as either a republican boot boy bent on bashing Britain or a lickspittle to the Brussels blob.

Boris Johnson, in his usual style, one befitting a noted fan of the famously anti-Irish Winston Churchill, asked: “Why isn’t he called Murphy like all the rest of them?”

David Jones, a former Brexit minister, described Varadkar’s approach to the Northern Ireland border question as “dogmatic”, unfavourably contrasting it with that of his predecessor Enda Kenny.

One unnamed Conservative MP told the BBC that the Irish should “know their place”, neatly illustrating why the EU remains popular in Ireland: it gives the county a voice independent of its former colonial master.

Some continue to make similar claims today: writing in The Daily Telegraph Charles Moore said that Varadkar spurred Sinn Féin into power. Varadkar, he claims, was guilty of “virulent nationalism” and “Brit-bashing.” This is either inane or insane. Varadkar is as anglophile as he is europhile, and Fine Gael’s politics are easily recognisable as those belonging to any centre-right or Christian democratic party today.

Surprisingly, one of the most level-headed views came from a columnist in The Sun, not a newspaper known for its love of the Irish. “Sinn Fein can, however, be relied upon to be even more hostile than Leo Varadkar, [but] there is little to suggest that those who voted for Sinn Fein on Sunday were motivated by concerns over Brexit or by a desire for a united Ireland,” Ross Clark wrote, noting the enormous gap between Ireland’s GDP figures and the lived reality.

In truth, British writers rarely see Ireland in its own terms, instead tending to view it through a British lens—and much of the public seems to struggle with the idea that it is an independent country.

Varadkar did much to placate Britain, refusing to push for a poll on Irish unification and saying that he respects the decision of the UK, which he called “an old friend”, to leave the EU. Varadkar has also said that “there will always be a place at the table for them if they ever choose to come back”.

Where Varadkar did stand firm was on purely Irish issues: making clear that the country will not be sucked out of the EU in order to benefit Britain; protecting supply chains that cross the UK; and ensuring that the border does not once again become a live political issue for the island.

Ireland’s independence is, in fact, the key issue in the election, but not in the sense of any immediate desire to reclaim the fourth green field (Northern Ireland). Voters, tired of over a decade of austerity, facing out-of-control rents and a sense that there is simply no future for them in Ireland—at least 350,000 have left since the 2008 crash, and a full 17 per cent of Irish-born people live abroad—voted for change. Or rather, a sizeable chunk of them voted for change—bear in mind, while establishment parties Fine Gael and Fianna Fáil were battered, they weren’t completely wiped out.

Even employers’ lobby group Ibec (the Irish Business and Employers Confederation) agrees, telling The Irish Times: “The public sector is too small for the size of the private sector, and that is really something for Ibec to say. The lack of doctors, the lack of guards [police] etc. You can feel it. We agree there needs to be an allocation of resources towards issues that affect people’s everyday lives, like housing.”

Anyone who was in Ireland during the lead up to the election or who has even a glancing relationship with the country knows why the vote went the way it did: the Irish voted on domestic Irish issues, not Brexit.

Still, a Sinn Féin-led government would clearly be a thorn in the side of Britain during its trade negotiations with the EU, more than any Fine Gael-led administration at any rate. Would Sinn Féin use Ireland’s veto to torpedo a deal? It seems unlikely, but the threat would be felt.

More likely, the Irish border would become the issue that won’t go away: Sinn Féin’s leader Mary Lou McDonald has said that a so-called ‘border poll’ is not a "red line" for her, but that it is the “direction of travel”.

It is hard to disagree. Recent polls in both Irish states show support for reunification – though the numbers in Northern Ireland are slim and very likely soft, dependent as they are on some amount of pro-British unionists being so annoyed by Brexit that they think their future lies in the EU, and, therefore, in a united Ireland. If Brexit does not in fact end in calamity then this cohort of voters is likely to return to a pro-British stance, something it may be doing anyway in the face of a rising Sinn Féin.

Still, former taoiseach Bertie Ahern told the BBC that a referendum on reunification was “inevitable.” At the very least, we can say that if Sinn Féin does come to power in the next election, be that in five years or in a matter of months should a government prove impossible to form, a united Ireland will at least be on the political agenda.  Five years hence would likely be a better outcome from London’s point of view.

The British are never done complaining that the Irish won’t shut up about history. The thing is, for the Irish it’s not history: it’s the present, albeit a present that most of the time they are happy to ignore. When cracks do appear, though, many Irish people—and it should be said that the majority of the Irish do not support the IRA and never have—feel irked that having bent over backwards for decades to accommodate the British they get very little in return, not even much respect.

After all, if the British thought that the mild and conciliatory Varadkar was a republican hard man and not just a committed europhile, how would it respond to an Irish government that really was both?