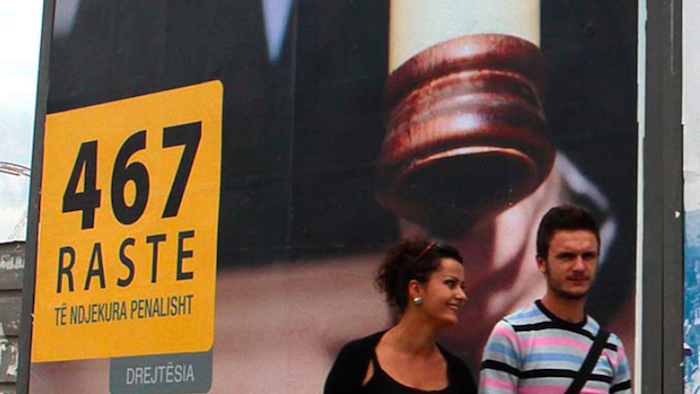 Something rotten in the state of EULEX

EULEX, the European mission to establish the rule of law in Kosovo, has been shaken by a huge corruption scandal. Pristina daily Koha Ditore has revealed that chief prosecutor Jaraslava Novotna and former judge Francesco Florit “are suspected of having accepted bribes in exchange for closing criminal cases related to notorious Kosovar gangsters”.

Anti-corruption task force investigator Maria Bamieh, who is at the heart of the revelations, also alleges that a third prosecutor, Jonathan Ratel, has “impeded investigations implicating politicians and businesspeople” and instead “opened disciplinary procedures against her”.

Believing there is “something rotten in EULEX”, Serbian daily Politika adds that judges also allegedly fabricated evidence that led to the arrest of Oliver Ivanović, a Kosovo Serb political leader. It concludes that —

the corruption allegations, harassment of whistleblowers and the fabrication of evidence show that prosecutors and international judges in Kosovo have adopted local customs instead of bringing in legal standards of their home countries.

Questioned by the foreign affairs commission of the European Parliament on 3 November, European External Action Service directors for the Western Balkans, Fernando Gentilini, and of civilian planning missions, Kenneth Deane, “declined to comment on details of the corruption allegations on grounds there is an “ongoing” investigation” inside EULEX, reports EUobserver. The mission maintains it and Kosovo judicial authorities “have been pursuing a joint investigation into these allegations” since 2013, which Bamieh calls a “lie” and a “complete farce”.