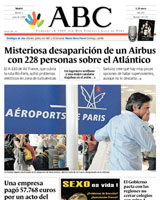 Established in 1903, monarchist and conservative in outlook, ABC flourished in the years 1982 to 1996, under the Socialist government, but went into a downturn with the founding of La Razón in 1999, run by one of its former directors, Luis María Ansón. In the last few years, prestigious writers have helped see ABC’s sales increase. Despite its reputation for virulently right wing opinions, ABC's culture pages are widely read.

The website, with more than 4.5 million individual clicks per month, is much appreciated for its “Visiones del Mundo” section, where the paper’s foreign correspondents comment international news.