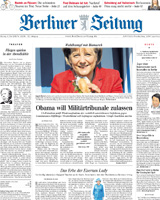 Established in East Berlin in 1945, Berliner Zeitung ("Berlin Daily") was owned by the Communist government of the Germany Democratic Republic. After the Berlin Wall fell in 1989, this left-wing paper later became the most widely read in the German capital. After several years in the red, Berliner Zeitung eventually merged with the Frankfurter Rundschau in 2011 as part of the DuMont publishing cooperative. The national pages are written in Berlin, at the paper's historic seat.