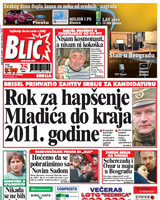 Founded in September 1996 by a group of Austrian business men, Blic (pronounced "Blitz", meaning “Flash” in Serb) is now one of Serbia’s most popular dailies. In 2000, the tabloid was noted for its support of the demonstrations that led to the fall of Slobodan Milošević. Since 2004, it has been owned by the Swiss press group Ringier. With a reputation for serious and reliable reporting, Blic is considered to be one of the best sources for Serbian political and economic news.