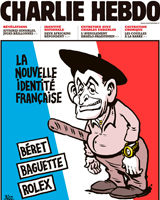 Founded in 1970, Charlie Hebdois an independent French satirical newspaper, which features investigative reports from France and abroad, politically incorrect cartoons, and scathing caricatures. Many of France's most famous cartoonists — among them, Cabu, Wolinski, Willem, Johann Sfar and Tardi — have been published by the weekly. At the time of writing, Charlie Hebdo's favourite targets include cult religions, the extreme right, Catholicism, Islamism and French President Nicolas Sarkozy.