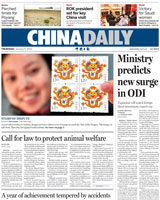 Founded in 1981 by the authorities in Beijing, China Daily is the country’s largest English language daily. Although it presents the Chinese government’s point of view on national and international affairs, China Daily, which targets foreigners living in China and English speaking Chinese, is more open than other organs of the official Chinese press. It is sometimes the first to break exclusive stories, which are specially selected for their potential impact on foreign perceptions of the People’s Republic.