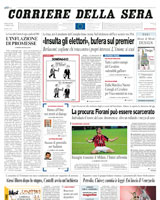 Founded in 1876, Corriere della Sera is Italy’s best-selling daily. While retaining an institutional aura, Corriere has maintained its independence throughout periods of political turmoil. Although its title suggests an evening paper (della sera) it has been published in the morning for over a century.

From the outset, Corriere established itself amongst its peers as the Italian paper of reference, voicing the opinions of the industrial bourgeoisie from the North. For a modern daily, its format is quite large, contributing to the reliable and traditional image it conveys. Milan’s vecchia signora (Old Lady) belongs to the RCS group which also publishes the well-known [Gazetta dello Sport](http://www.gazzetta.it/) and holds a 45% stake in Spanish daily El Mundo. Like its rival La Stampa, Corriere is linked to the Agnelli family, the owners of Fiat. Like other Italian national dailies, the Corriere publishes a plethora of supplements such as Ido Donna (for women) and the Corriere della Sera Magazin