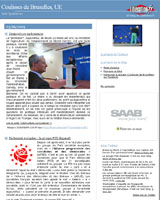 Created in 2005 by Jean Quatremer, Libération's Brussels correspondent, "Brussels Backstage" is, according to its author, "a chronicle of the Union's highs and lows, in order flesh out an aventure all too often considered technocratic." Born in 1957, Jean Quatremer is a specialist in EU issues. The author of two books : Ces hommes qui ont fait l'euro (The Men who made the Euro) (Plon, 1999) and Les maîtres de l'Europe (The Masters of Europe) (Grasset, 2005), he was awarded the Louise Weiss prize for European journalism in 2006.