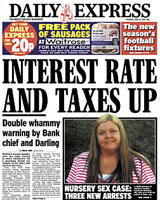 Modestly describing itself as “The World’s Greatest” newspaper, the Daily Express is nevertheless one of the only British tabloids to sell less than a million copies per day. Resolutely conservative and nationalist in outlook, as the St. George illustration on its title suggests, The Express was once a bastion of traditional moral values. Since being bought out by pornography press baron Richard Desmond in 2000, however, it has seen its influence wane.