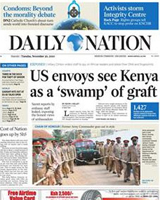 Founded as a weekly under the title Taifa ("The Nation" in Swahili) in 1958, this Kenyan newspaper became a daily in 1959 when it was acquired by the spiritual leader of the Ismaili Muslim community, Karim Aga Khan, and began to be published under the English name, Daily Nation, in 1960. The title belongs to the Nation Media Group, which also controls the business daily, The EastAfrican, as well as NTV television and Easy FM radio. Today, the Daily Nation is the newspaper of record in Kenya and the most widely read title in East Africa.