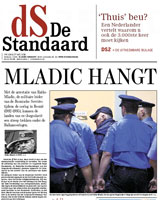 The history of the De Standaard (est. 1918) was long bound up with that of the Flemish movement and, more specifically, that of the Flemish Social Christian Party that governed Belgium from 1945 to 1999. In point of fact, its founders sought to uphold the use of Flemish in Belgian education and administration. Founded in Antwerp, the Flemish establishment’s newspaper of record has distanced itself from the Roman Catholic world in recent years, though preserving its faith in the language struggle. Thanks to the quality of its analyses and supplements, this daily openly aspires to become a “newspaper of European calibre”.