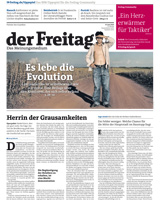 Founded in 1990 out of the merger of East Berlin's Sonntagszeitung and West Germany's Volkszeitung, Der Freitag (Friday) has become a left-wing publication. Originally dedicated to the social and political consequences of German reunification, it changed its formula in 2009, focusing more on debate and opinion pieces. Der Freitag is the first German paper to devote significant space to the "community", offering bloggers the chance to publish articles alongside those of staff. It also has forged partnerships with two British publications, the Guardian and Observer, from which they translate selected articles into German on a daily basis.