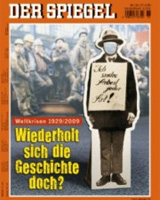 Germany’s foremost magazine of investigative journalism, founded in 1947. This aggressively independent illustrated weekly has sparked several political scandals. From the outset Spiegel magazine declared war on corruption and the abuse of power. It is known – and sometimes disparaged – for its special brand of often irreverent journalistic jargon.

Spiegel Online is Germany’s leading news site. With an editorial staff of its own, it takes a more pugnacious line than the print version, though without detracting from its in-depth coverage. It also puts out an international version in English with translations of the best articles in the magazine, and runs various online-only sections of its own. As to videos, Spiegel TV presents four news bulletins a day (in German) as well as reports on current events and topical subjects.