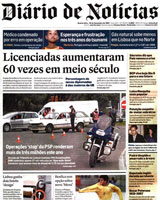 Founded in 1864, Diário de Notícias (News Daily) served as the unofficial organ of the Salazar dictatorship. In our day the Diário de Notícias can be considered a centrist paper. Thanks to a layout overhaul and efforts to provide comprehensive coverage, the title has succeeded in attracting a younger readership, and is now neck and neck with Portugal's other paper of record, Público.

Its online edition, launched in 1995, used to be a constant disappointment to Lusophone web surfers: its interface was hard to handle and the archiving system archaic. These shortcomings seem to have been partly remedied since October 2004. A new version of the nation’s premier daily finally measures up: a simple pop-up menu gives you free access to a week of back issues, plus a selection of the day’s articles are also available free of charge. DN’s supplements, on the other hand, are inaccessible, as are all the older archives.