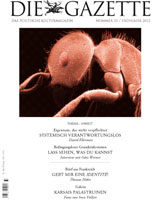 “More in-depth than a newspaper, more topical than a book”. Online since 1998 and at newsstands since 2004, Die Gazette is a German quarterly of political culture geared towards an intellectual readership, “between Der Spiegel and Die Zeit”, and delves into the links between culture and politics. Positioned in the centre left, it is critical but not hostile towards globalisation and publishes authors from a wide political spectrum, ignoring the headlines of the day. At around a hundred pages, with plenty of text and few images, Die Gazette has been described by critics as “the journal that makes commercial magazines sigh”.