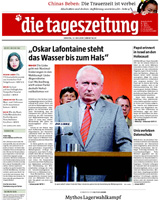 Alternative daily, founded in West Berlin in 1979 from within the autonomist movement, partly as a reaction to the government’s attempts to gag the press after the spate of left-wing terrorism known as the “German Autumn” (1977). The Taz has become the German mouthpiece of “serious” left-wing feminists, ecologists and pacifists.

Posted on its website are the complete contents of the broadsheet as well as its regional editions from Bremen and Hamburg – plus the German version ofLe Monde diplomatique, which is published by the Taz.