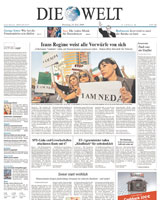 Die Welt (“The World”) is the flagship paper of publisher Axel Springer, the German/European press group which also publishes the German tabloid Bild. Founded in 1946, Die Welt is comparable to the French daily Le Figaro : its conservatism clearly comes to the fore in the commentary section. Distributed daily in over 130 countries. Die Welt since 2004 has been published in tandem with its little sister, Welt Kompakt, which is put to bed between 11.30 pm and 12.30 am, making it the national daily with the latest breaking news. Welt Online has its own editorial staff, who keep the site well-stocked with special reports and Welt TV video coverage of current events, plus an audio feature and a Newsmap that recaps goings-on in cities the world over.