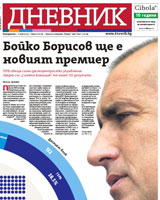 In the wake of the success of the business weekly Kapital, which gained a reputation for its political and economic analysis, publisher Economedia launched Dnevnik in 1999. "The Daily" was quickly acknowledged for its independent editorial line and professional reporting standards. Dnevnik mainly targets a business readership, but it also offers a guide to cultural life in Sofia.

Dnevnik became an Internet-only operation in October 2011. Its paper edition was merged with another daily to create Kapital Daily.