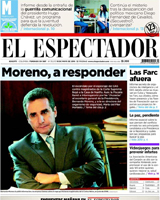 Founded in Medellín in 1887 and headquartered in Bogotá since 1915, "The Spectator" is one of Colombia's most dynamic dailies. On occasion it has been forced to pay a high price for its editorial stance, and in particular its opposition to the country's drug cartels, which resulted in the assassination of director, Guillermo Cano, in 1986, and a bomb attack on the its offices in 1989. The daily is currently owned by the Santo Domingo family, which controls the country's largest business group. El Espectador's website offers access to all of the content of the paper edition.