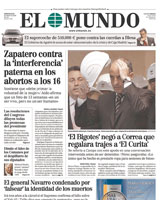 First published in 1989, El Mundo ("The World") espouses a style of reporting modeled on American investigative journalism, which on occasion veers towards sensationalism. Publisher and editor, Pedro J. Ramírez, affectionately known as Pedro Jota, has two pet hates: socialists and rival daily El País. His editorial line, which is often poorly defined, makes it hard to situate him on the political chessboard. It is a weakness that he has often turned to his advantage with publication of unexpected opinion pieces, contradicting the standard point of view.

The El Mundo website, which offers much more than a simple online version of the daily, claims to attract 20 million visits per month. It features a number of sub-publications including: Metrópoli, a guide to leisure in the Spanish capital, Elmundovino on wines from Spain and elsewhere, and YoDona, a women's title, which offers a range of blogs on various themes.