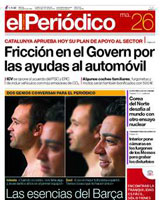 Founded in 1978, El Periódico de Catalunya is a popular centre-left daily newspaper, with a strong focus on Catalan affairs, and the defence of Catalan interests. Most of its sales are in Barcelona. Initially available only in Castilian, the newspaper has also been published in a Catalan-language version since 1997. It is owned by the large Barcelona based press group Zeta.

Throughout its history, El Periódico has played a pioneering role in the Spanish media. In 1994, it became the first Spanish newspaper to launch an online version. Three years later, it broke new ground with the introduction of its Catalan-language edition, which now makes use of a specially developed machine translation system. In 1999, it became the first Spanish paper to open its own fully automated colour printing plant. Like the paper edition, the El Periódico website is posted in two versions, one in Castilian, and another in Catalan, and El Periódico readers also have the option of downloading the paper in pdf format.