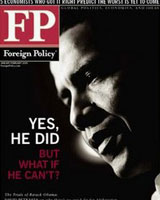 Founded in 1970, the magazine Foreign Policy was owned by the Carnegie Endowment for International Peace before being bought by the Washington Post Group in 2008.

Formerly an academic quarterly, it is now published as a bimonthly glossy under the subtitle "The global magazine of economics, politics and ideas".

It appears in several foreign languages, including Spanish, Romanian and Bulgarian.