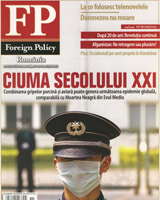 Launched in December 2007 by Adevărul Holdings (the media group which owns, among other dailes and weeklies, Adevărul and Dilema Veche), Foreign Policy Romania is now one of 11 foreign editions of Foreign Policy, and one of the only monthly magazines in the country. Approximately one third of the content is written by journalists writing in Romania, the rest being taken from the US edition. Like the latter, FP România is devoted primarily to politics, economics and international relations. Its editor is Ovidiu Nahoi.