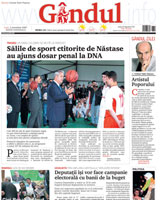 With an old proverb — "No one can think for you" — and the image of a nationally renowed statue by Hamangia - "The Thinker" - as logo, Gândul("The Thought") was founded in 2005 by Mircea Dinescu, Cristian Tudor Popescu, Bogdan Chiriac and Lelia Munteanu. The current editorial team was a breakaway from Adevarul (The Truth), a major Romanian daily founded in 1888. The founder / editor of the paper, the turbulent Cristian Tudor Popescu, is a noted science fiction author with a reputation for shooting from the hip. As of April 2011, due to declining sales for print newspapers in Romanian, Gândul is now available only via the web or Ipad editions.