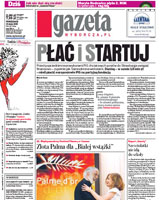 Gazeta Wyborcza ("Electoral Gazette”), founded by Adam Michnik in May 1989, has become a grand national daily despite limited resources, providing informative and secular-minded news in a society where the Catholic church is excessively influential. Among the many supplements it produces, at least two are exceptional. Grand Format is an improved version of Monday’s culture magazine. Its lengthy articles, illustrated by the country’s best graphic artists, explore a plethora of subjects which are the delight of those of its readers in the know. The High Heels supplement, while aimed at a female readership, appeals by virtue of its humour and intelligence to a broad swathe of the Polish population.