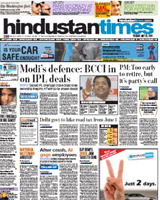 Launched in 1924 with Mahatma Gandhi presiding over the opening ceremony, the Hindustan Times (circulation 6.6 million) is India's second most-widely read English newspaper after its great rival the Times of India. The flagship of the Hindustan Times Group, this sober, well-informed daily includes several themed supplements and has a wide reach in the north of the sub-continent, with simultaneous editions published in eight major cities, including New Delhi, Mumbai and Calcutta. The Hindustan Times website is exhaustive, with access to the regional editions and the daily's Hindi version.