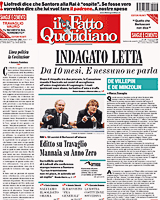 Founded by Antonio Padellaro, former editor in chief of L'Unità, Il Fatto Quotidiano gathered some illustrious stray dogs from mixed branches of Italian journalism around a crystal-clear core idea: unrestrained opposition and denunciation of Silvio Berlusconi's "degrading sultanate". This distances the fledgling daily from Italy's main opposition party, the PD, deemed too soft and riddled by divisions to represent a viable alternative.

Declaring their resolve to maintain an editorial line free of any kind of patronage, the editors have chosen to fund the paper by means of a co-operative. This initially raised questions about the fledgling organ’s chances of survival, but they were partly dispelled by a surprising 30,000 subscriptions collected on the preview website L'Antefatto ahead of the launch on September 23rd, 2009.