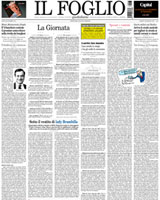 Created in 1996 by Giuliano Ferrara – a controversial journalist who veered from the far left to neoconservatism to become Berlusconi’s government spokesman –, Il Foglio targets an elite readership. Initially comprising only a single page – hence the name “the sheet”, it remains one of the slimmest Italian dailies, preferring analysis and commentary to reporting on breaking news.

Although generally considered a right-leaning paper, it does not stint on criticism of Silvio Berlusconi, and even endorsed ex-Communist Massimo D'Alema’s presidential bid (in 2006), while on the other hand supporting calls for a European moratorium on abortion. According to an-house survey, its editors run the gamut of Italian politics, from Forza Italia to Rifondazione Comunista.

Il Foglio‘s website was one of the first to give internauts access to all published articles. After a sea change in 2008, it has now become more of a journalists’ collective blog than a news site as such.