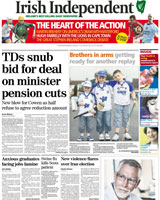 The Irish Independent has been holding its own against cutthroat competition from British papers like The Times or The Daily Mail that have been printing “made-in-Ireland” editions for a few years now: it’s still the most widely read “home-grown” national newspaper in the country. Keeping close to its readers’ concerns, it publishes a weekly supplement on Irish farming news. Tony O'Reilly, ex-CEO of the International News and Media Group that owns the paper, in 1998 became the first Irishman to buy a British daily, viz. London-based The Independent. Like the latter, it is printed partly in tabloid format.