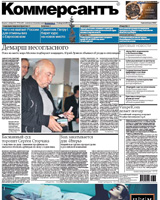 Founded in 1909 and later banned by the Bolsheviks in 1919, Kommersant was relaunched in 1990 first as a weekly and shortly after as a daily. The self-styled “Westernised" business newspaper is one of the leading titles of the Moscow press. Kommersant has exercised a significant influence on journalism in Russia and trained a large number of reporters, who now work for other newspapers. In 1997, the Kommersant group, which also publishes the magazines Kommersant-vlast (Power) and Kommersant-dengi (Money), was bought by oligarch Boris Berezovsky. In 2006, it was sold to its current owner Alisher Usmanov, a mining and metals tycoon, who is also the CEO of GazpromInvestHolding, a subsidiary of the Russian energy giant Gazprom.