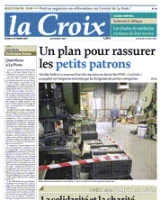 Founded by the Assumptionists in 1880,La Croix is renowned for its reporting on religious questions, but it is also careful to define itself as a non-specialist newspaper. The RomanCatholic daily reports extensively on social issues, and is distinguished by its choice of front-page news, and a focus on stories that are ignored elsewhere in the French press. With an official line that is close to Vatican II, which promotes ecumenism and the opening of the church to the modern world, it is often described as a "left-wing Catholic newspaper."