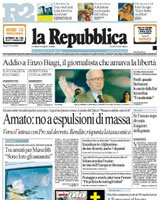 Considered the newspaper of Italy’s intellectual and financial elite, La Repubblica was founded in 1976. With clear sympathies for the Democratic Party, it is the bugbear of Italian PM Silvio Berlusconi.

Owned by industrialist Carlo De Benedetti’s L’Espresso group, La Repubblica is famous for writers such as Umberto Eco, Giorgio Bocca or Bernardo Valli. After a somewhat shaky start it established itself, alongside Corriere della Sera, as Italy’s foremost centre-left daily. The website is one of the richest and most consulted news websites in Italy.