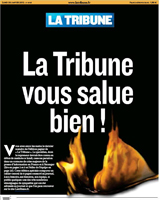 Launched in 1985, La Tribune, which is only outranked by Les Echos, was France's second largest business and financial daily with a circulation of 81,937 copies per day in 2008. A victim of the economic crisis it published a final paper daily edition on January 30, 2012, on the same day that it announced it had been bought out by Hi-Media and regional press group France Economie Régions. Since April 2012, a weekly paper is published, containing some articles already published online along with unpublished texts.