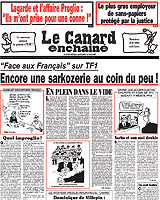 Founded in 1915, Le Canard enchaîné is a satirical French weekly. Noted for its editorial independence (only staff are allowed to own shares) and its highly efficient network of news sources, the Canardis often the first newspaper to report on French political scandals. It also publishes work by some of France's best known cartoonists, including Cabu, Pétillon and Martin Veyron. The Canardwebsite presents the newspaper but does not offer access to content.