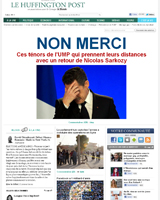 The French Huffington Postwas launched on January 23, 2012. The site is a 51 percent subsidiary of the American group AOL, which owns the Huffington Post U.S.A; the Le Monde group owns 34 percent and 15 percent is held by businessman Matthieu Pigasse. Its editor is Paul Ackermann and Anne Sinclair is the editorial director. The French Huffington Post rose to the forefront of news sites active solely on the Internet (so-called “pure players”) in July 2012, according to figures from Médiamétrie Netratings, released on September 27, with 1,916,000 unique visitors.