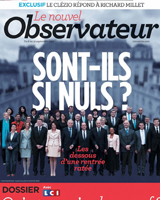 Le Nouvel Observateur is a French general news weekly founded in 1964. Espousing a social-democratic editorial line, Le Nouvel Observateur focuses on social issues. Launched by former members of the WWII French resistance, the magazine has always been marked by a spirit of opposition, which was notably evident in its reports on torture in the Algerian war. Managed by politically committed journalists, the weekly has always attempted to accompany social changes, particularly in the wake of May 1968. It belongs to the Perdriel Group, which publishes Sciences et Avenir and Challenges, and also owns the Rue89 news website.