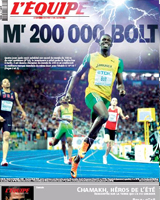 Founded in 1946, this French sports newspaper of report has played a major role over the years in both the organization and the reporting of major sports events in Europe.

A direct descendant of the sports newspaper *L'Auto*, which started the Tour de France in 1903, "The Team" also contributed to the launch of the European Cup and Champions' League. It has always been noted for the literary style of its reporting, and its talented staff, who aim to describe all the drama of sporting events — a highly successful approach that has earned it prestige both at home and at an international level.

The L'Equipe website features a dynamic offering of updated articles, podcasts and videos, and since 1998, the daily also has its own TV channel: L'EquipeTV.