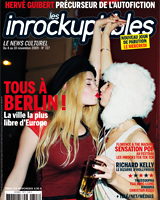 Founded in Paris in 1986, Les Inrockuptibles is a left-wing cultural weekly, which reports on rock music, contemporary art, literature and cinema, as well as major movements in society. Since 1990, the magazine has organized a music festival based in Paris. The weekly's website provides access to most of the content of the paper edition, a concert, cinema and television guide, and an influential weekly playlist. Les Inrockuptibles also has a sister publication in Argentina: Los Inrockuptibles.