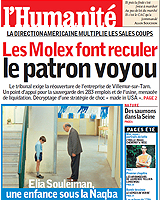 Launched in 1904 by socialist leader Jean Jaurès, from 1920 to 1994, L'Humanité was the mouthpiece of the French Communist Party. In recent years, it has opened up to a wider range of left-wing views, but it continues to maintain a staunchly anti-liberal stance. In 2005, it actively campaigned for a left-wing "no" in the referendum on the European Constitution.

The L'Humanité website, which dates from 2006, offers free access to all of the newspaper's content, a day after the publication of the paper version. It also houses a digital archive of all the editions published since the launch of the site, and provides links to web pages produced by volunteers, who translate some of the newspaper's content into English, Spanish and Russian.